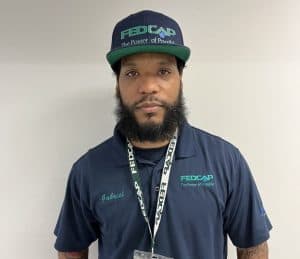 Gabriel Galvez had a hard time as a young man. He struggled with depression and made some poor decisions along the way. After a period of incarceration, he had a moment of clarity that he said hit him “like a shining star.”

“I was headed down the wrong path and didn’t realize the harm he was causing to myself and my family. I didn’t want to live in poverty. I know I could do better.”

He certainly has, A hardworking father of two, Gabriel, 31, started working for Fedcap at the Adam Clayton Powell Jr. State Office Building on 125th Street in Manhattan. It was a long way from his home in Brooklyn, and he and his wife had to pay for child care because they couldn’t pick their kids up from school. Gabriel was able to transfer to 14th Street to work on sanitizing projects related to the pandemic. It was closer to home, but an even better opportunity soon presented itself.

In December, 2021, when Fabio Lopez, Area Manager for Fedcap Total Facilities Management (TFM), got a call about a vacancy on the MTA contract at 130 Livingston Street Plaza in Brooklyn, he called supervisors at 14th Street to see if they could recommend someone. They could; it was Gabriel.

From the start of his work for Fedcap, Gabriel was known as a great worker. “I was told that he would be a perfect fit for that location because of how he had proven himself as an employee,” Fabio said. “There were no issues at all with him and he always gave 110 percent.”

Herbert Mercado, Gabriel’s supervisor at 14th Street, concurs. “He got along well with all the other workers and always got the job done. I was happy to recommend him.”

“To me learning is fun,” Gabriel said. “I’m very handy, and I try to be open-minded. I like to help people out, I have always been that way.”

The move to 130 Livingston Street would be a good one for Gabriel. With the potential for COVID-related services winding down, and with two children ages 14 and 6 to provide for, Gabriel wanted something more stable. The work at Livingston offered that, as well as opportunities to become a team leader or field supervisor. It also meant a morning shift, leaving him enough time to pick up his kids at school.

Prior to the move becoming official, Fabio met with Gabriel at 14th Street. “He was very motivated,” Fabio said. “He opened up about how grateful he was to Fedcap for providing him with the opportunity for more stable work so that he could continue to provide for his family.”

John Savilli, Facilities Manager for the MTA-NYC- Headquarters, 130 Livingston, has been working with Gabriel since he joined the MTA contract at Livingston in March, 2022. One of the things that John noticed immediately about Gabriel is that he loves to help his colleagues. He’s very communicative, and eager to teach new skills and techniques that he has learned on the job.

For example, on a recent Saturday, Gabriel came in to learn about a new process for stripping and waxing floors. The process involved new cleaning procedures and chemicals, and Gabriel dove right in, asking questions, learning it cold, and eagerly explaining it to his colleagues.

“I never saw anyone so excited about learning a new process,” John said. “He even had some suggestions for how it could be improved. Gabriel is a real gentleman, very outgoing and very resourceful, and a mentor to other employees. He always goes above and beyond and will work any shift where he is needed, including emergency shift, overnights and weekends.”

Gabriel is thrilled with his new job, and hopes one day to be a team leader or supervisor for Fedcap. “Fedcap has been a great community and family for me. I have learned so much, and they help me out a lot with my personal disability. I’ve learned to be more aware of certain things. Fedcap is just awesome, one of a kind.”